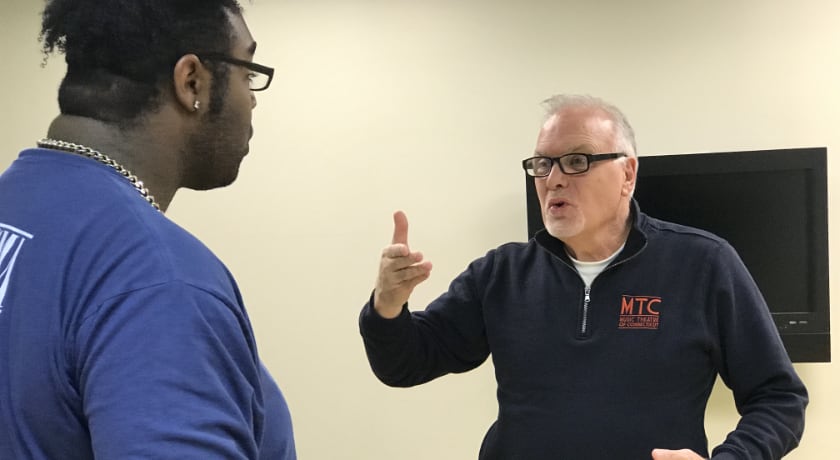 Balancing my passion for directing is my unwavering commitment as an educator. I have been on the staffs of several college theatre departments, and am currently an Adjunct Professor at Sacred Heart University.

I believe theatre is a craft that is passed down through generations, and I feel a strong artistic responsibility to continue that story. Even more gratifying is to have had numerous students blossom and realize successful Broadway careers.

Having started by career as a singer/actor, I was technically well- trained from college to study the finest New York teachers. I bring a unique blend of strong vocal technique in the Joan Lader tradition, essential for the demands of the musical theatre; with the supportive director’s eye, helping the actor to create a complete and powerful story. The marriage of these skills results in acting-driven song development required for today’s audition material and roles themselves.

Acting for the Musical Theatre

I love training students in the crucial acting skills required for performance in the classic and contemporary musical theatre.  In addition to fundamental acting techniques, scene and song analysis, overall character arcs, and character relationships; I hold a strong “inside/out” philosophy, training students in a very organic and natural technique. Above all else, I create a safe and nurturing learning environment, encouraging risk-taking, exploration and moment-to-moment freedom within a solid real-life foundation.

Fifteen years ago I created Music Theatre of Connecticut’s “College Bound in the Performing Arts” designed to guide students/parents through the complicated process of college BFA and BA programs from student profiling for selection, visiting, audition selection, and audition package creation and execution. I have also consulted with MFA candidates on many of the same issues, including program identification and audition preparation. I am proud that our students have attended many of the most elite Performing Arts Programs in the country including NYU, Cincinnati Conservatory of Music, Boston Conservatory, Northwestern University, University of Michigan, Syracuse University, Emerson College, Muhlenberg College, Ithaca College, and University of Miami. www.musictheatreofct.com/college

“Kevin Connors provides an invaluable service to college and pre-college students preparing for a career in musical theatre. With his broad expertise in all the necessary skill requirements and his deep understanding of contemporary performance practice he gives students a significant advantage in college auditions and as they begin to make their way into the profession.”
– Mary Saunders-Barton, Professor Emeritus Music Theatre Voice and Voice Pedagogy, Penn State University

“While a Musical Directing student at The Hartt School, I had the immense pleasure of working with Kevin on a number of projects and classes. Not only is his musical skill superior, but his knowledge of drama, acting and directing show very clearly in every collaboration. I know Kevin to be a thoughtful, motivating, empathetic and uplifting presence, and I would highly recommend him for any of the roles he takes on in the theatre.”
– David John Madore, Music Director/Conductor/Pianist at Arvada Center for the Arts and Humanities

“I am proud to say that I am a product of MTC’s College Bound program. I could not have chosen a better foundation for my skills in theatre. Kevin Connors is invaluable in not only his teaching, but also in his connections, support and guidance. I would not be where I am today without the College Bound program.”
– Mia Gentile, BFA Music Theatre, Cincinnati Conservatory of Music University of Cincinnati, currently appearing on Broadway in Kinky Boots

“MTC and its college program was one of the best things that has ever happened to me. I got accepted to my top schools in both BFA Musical Theater and BFA Acting conservatory programs. Not only are Kevin and Jim people I respect as teachers, but also as friends. They were caring and committed to ensure my success and I don’t know if I would have had the success that I did if they were not by my side. I walked into MTC with low self-esteem, low confidence, and an unrefined technique. A few years later I walk out with my head up high, and ready to face the challenges that will I will endure in the future thanks to the MTC college process that I was honored to be a part of.”
– Matthew Greenberg, BFA Musical Theatre, Ithaca College; MFA Candidate, Ohio State University